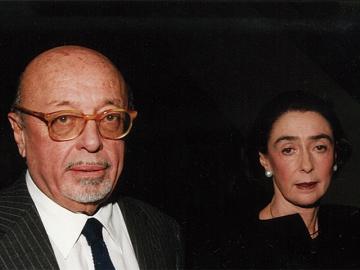 Mrs Mica Ertegun has been made an honorary Commander of the Most Excellent Order of the British Empire (CBE), an award conferred by HM The Queen for her services to philanthropy, education, and British-American cultural relations.

The award recognises Mrs Ertegun’s support for humanities postgraduate education in the UK, in particular her establishment of the Mica and Ahmet Ertegun Graduate Scholarship Programme in the Humanities - open to students worldwide - at Oxford University in 2012.

Mrs Ertegun has endowed the university with substantial funding for post-graduate research in the humanities, under the Ertegun Programme, which will include the endowment of graduate scholarships in perpetuity. This is the single largest philanthropic gift for the humanities at the University of Oxford.

Born in Romania, Mrs Ertegun is a citizen of the USA, and received her CBE in a special ceremony in New York. Antonia Romeo, British Consul General New York and Director-General Economic and Commercial Affairs USA, said, “The awarding of Mica Ertegun’s CBE recognizes her exceptional transatlantic philanthropic activities, and her major contributions to British-American cultural relations. These charitable efforts and initiatives, especially via the Mica and Ahmet Ertegun Graduate Scholarship Programme in the Humanities at Oxford University, are key to the growth of generations of future global academic leaders.”

Established in 2012, the Mica and Ahmet Ertegun Graduate Scholarship Programme in the Humanities at Oxford University provides recurrent annual funding for a population of 15 – 30 graduate students, known as Ertegun Scholars. In addition, Mrs Ertegun has overseen the conversion of an Oxford University building into an academic base for the students, Ertegun House, and established an annual lecture programme.

Outside of her philanthropic endeavours, Mrs Ertegun has spent over 50 years as an accomplished interior designer, founding MAC II in 1967, which has developed a strong global reputation in the industry and has been featured in numerous publications and exhibitions. A long-time supporter and patron of the arts in New York City, she has served on the boards of the New York City Ballet and Archives of American Art, and currently on the board of the World Monuments Fund, Jazz at Lincoln Center, and Oxford’s Mica and Ahmet Ertegun Graduate Scholarship Programme in the Humanities.

The UK honours system recognises exceptional achievement and service to the nation, and includes non-British nationals who receive “honorary” awards for their important contribution to British interests. All British honours are awarded on merit, and honorary awards are conferred by HM The Queen on the advice of the Foreign and Commonwealth Secretary.