Ertegun Scholars' visit to the Houses of Parliament 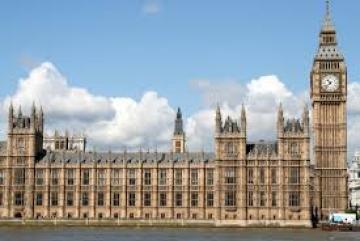 The aesthetic of the chamber of the House of Commons is ubiquitous in British culture – perhaps more so now than ever before thanks to the tumultuous events of the last months. The House of Lords, similarly formed but with a few more tonnes of gilding and a higher rate of silver-haired residents, takes a close second place as symbolic heart of British parliamentary politics. Above the House of Commons is a gallery (notably separated from the house by a large pane of protective glass), from which it is possible for members of the public to spectate upon debates, ostensibly for the reason of democratic transparency. It came as a surprise to myself, however, to find out that on certain days when the Houses are not in session, it is possible for members of the public to take tours of Parliament in which they can explore the network of chambers, lobbies, and state rooms in much greater detail, as a group of Ertegun scholars did on the 9th of March.

Starting in Westminster Hall, the oldest (and coldest) structure in Parliament dating back to the 11th century, the group began by ascending the stairs from which a multitude of world leaders – from Nelson Mandela to Barack Obama – have delivered speeches on state occasions. We then progressed through St Stephen’s Hall to the Central Lobby, a room highly familiar as the place where the world’s media typically amass in the run-up to important votes and debates, wrangling passing politicians into interviews. Under the austere gaze of statues of former Prime Ministers Thatcher, Churchill, Attlee, and Lloyd George, some of the more archaic and arcane mechanisms of parliament were explained, before we began our way down a corridor towards the House of Lords. We were not quite prepared for the splendour of the rooms surrounding the chamber, which whilst impressive certainly seemed a little distasteful to some. Our guide was at pains to remind us that we were treading on the same ground as many monarchs – including the current Queen – have whilst processing to the House of Lords for the state opening of parliament, though perhaps Her Majesty’s feet are separated from that ground by a red carpet or two.

After a sojourn in the chamber of the House of Lords we returned to the Central Lobby to take a trip to the Commons, a slightly less grand chamber, partially because – as was explained to us – it was severely damaged in WWII bombing, and rebuilt in the late 1940s. The intimacy of the chamber was striking, with room for only around two thirds of all MPs to sit. It was somewhat surreal to stand at the dispatch box where just a few days later the Prime Minister was to put forward her reformulated Brexit deal to a packed House, and to move between the benches from which so many iconic figures in British politics have spoken. One of the highlights was to visit the two voting lobbies, where the mechanism is such that MPs must physically go into either the aye or no lobby in order to indicate their vote. A story was recounted of a rather well known former Conservative Secretary of State for Education who found himself in the wrong lobby too late and, with the doors locked, sought shelter in a toilet to avoid the shame of being seen inadvertently voting out of line – this person is currently bookies’ favourite to replace our current Prime Minister.

With our political and monarchical appetites well satiated, we then enjoyed afternoon tea in one of the Parliamentary restaurants overlooking the Thames – a perfect way to end the experience, surpassed only by then retiring to a nearby pub to enjoy England’s 57-14 victory over Italy in the Six Nations.