The Complete Deaths of Shakespeare at the Oxford Playhouse 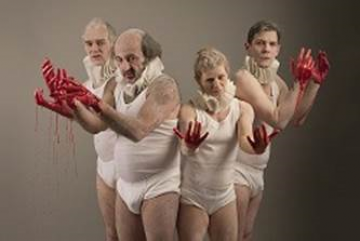 How do you stage Shakespeare in the 21st century? How do you steer free of the Scylla of a semi-senile, seen-a-thousand-times, grand-gesture kind of Shakespeare, without touching base with the Charybdis of a pretentious, navel-gazing, and vacuously pseudo-intellectual Shakespeare with forced references to contemporary political developments?

In their ambitious play The Complete Deaths, the performance collective Spymonkey works hard to formulate an answer. In a collection of piercing, hysterical, slapstick and sometimes tender scenes, they toil with great sophistication through the rich tradition of cliché to find some space for an honest artistic take on the work of Shakespeare. This space is precarious, and they permit themselves very little of. There are some tender and beautiful scenes involving proxys such as slaughtered flies or burned papier mâché figures in which the power of the language can be brought out. But these scenes have a hard time against a perhaps slightly overstated case for the impossibility of any genuine approach to Shakespeare.

It was a real treat to see this play, and it allowed some of us to continue a conversation about the do’s and don’ts of contemporary theatre which we had started after watching Hamlet at the Royal Shakespeare Company in Stratford.