The Chinese Painting Gallery, a behind the scenes visit to the Ashmolean 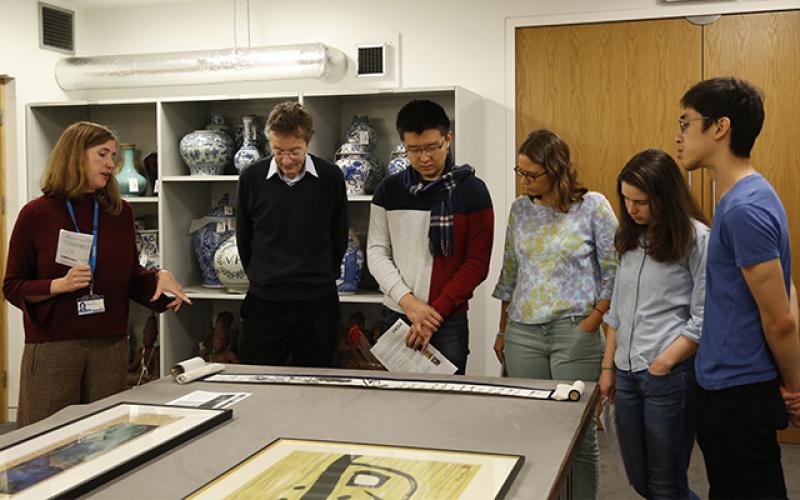 On Friday 20 October, several Ertegun scholars, accompanied by Ed and Jill, visited the “Behind the Scenes” exhibit in the Chinese paintings gallery at the Ashmolean Museum. The visit included an introduction to the Khoan and Michael Sullivan gallery (formerly Professor of Chinese Art at SOAS and Stanford, and later fellow at St Catherine’s, Oxford), and a private viewing in the study room of reserved collections also donated by the late Professor Sullivan, including a sneak peek at some works of contemporary Chinese artist Qu Leilei that will be part of an upcoming show in November.

We met our guide Francesca in the painting gallery, where a series of 19th- and early 20th century literati paintings were placed in dim but warm light. The genre “literati-painting” reflects the prevalent artistic taste among the traditional Chinese elite, and usually has the appearance of a landscape; it is often a selective and highly stylized representation of a natural setting, often depicting a humble mountain cottage amid clouds and running streams. The occasional cameo appearance of a reclining or sitting man, perhaps a retired scholar official, enjoying a leisurely stroll or absorbed in a game of Go, was indicative of the ideal spiritual escape for the urban bureaucrat of the time. I remember being surprised by the collection when I first visited the Ashmolean, because this was one of the very few galleries I have come across in the West that features literati paintings, and indeed, it remains the only one of its kind in Britain. Most Western collectors of pre-modern Chinese art favored murals, vases, and especially sculpture, perhaps due to their formal and thematic affinities with more familiar works of art from India and Central Asia. The literati-painting, on the other hand, was relatively neglected. Francesca introduced us to the context of the exhibit and explains its provenance—with thanks to Michael Sullivan, who first visited China in the ’40s and befriended many artists who later rose to prominence.

Shortly after we proceeded to the study room and looked at works of several contemporary artists, whose new conceptions of nature I found particularly intriguing. Three examples would illustrate their different creative approaches in representing landscape. First is Grain Rain, a small watercolor by the architect Chen Chi-kwan: what initially looks like water ripples surrounding the Karstic terrain turns out to be rice paddies. The little trompe l’œil pays homage to the lifestyle in the wet, mountainous provinces of South China. Another is Yang Yanping’s Black, green and grey abstract landscape, which consists of bold patches of colored ink overflowing and mixing with each other. Yang, also an architect by training, creates on paper a sense of space that is simultaneously mysterious, pensive and haunting. Finally, there is the calligraphic collotype print Huanghe of Wu Guanzhong, where the two characters for “Yellow River” are incorporated in what can be taken as an impressionistic picture of houses, boats and arid fields next to a muddy waterway.

Another highlight of the collection is the works of Qu Leilei, who is currently based in the UK. We have the Kneeling Girl, which is representative of a long-lasting effort among modern Chinese artists to reconcile the western nude with ink painting, the traditional medium of Chinese art. The Reclining Nude (Danae) is another ambitious attempt to join in conversation with the western art tradition, with its clear (yet cryptic) reference to Greek mythology. Signs of geometrical abstraction on the figure’s back, and especially her ankle bones, seem to me to recall art from an earlier era, with its tinge of socialist realism. Another example of fine brushwork, the Portrait of Michael Sullivan shows an even more striking realist style, one that is reminiscent of such influential pieces of realist art as Luo Zhongli’s 1960 oil painting Father.