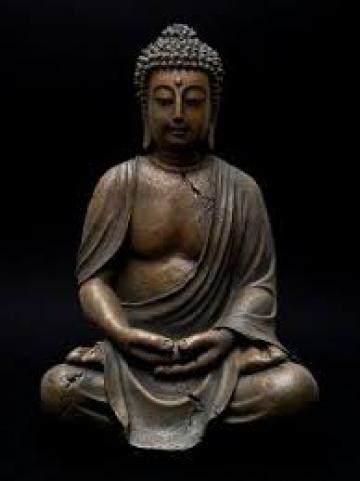 On Wednesday 18th October 2017, Ertegun scholars were treated to a private viewing which marked the opening of the Ashmolean’s autumn exhibition Imagining the Divine: Art and the Rise of World Religions. Curated by Jaś Elsner and Stefanie Lenk, the exhibition explores the journey of religious iconography through time and across the ancient world. This fascinating collection brings together devotional objects from major religions to show how religion manifests visually in material culture and how people have dealt with the problem of representing the unrepresentable.

Artefacts from Hinduism, Buddhism, Judaism, Islam, and Christianity are displayed evocatively together, highlighting the early evolution and fluidity of religious imagery now familiar to us today in canonical form. Points of contact and connectivity are a particular focus, such as Christ in the guise of a Roman emperor on a traditional style Roman floor mosaic from Britain, Buddha depicted as an avatar of Vishnu, or the image of a Buddhist goddess reworked into the wall of a mosque. Several objects surprise or defamiliarise, such as figural imagery on a Jewish mosaic or a cruciform brooch with an Islamic inscription. Among the treasures are some of the earliest surviving Islamic manuscripts, a highlight being the so-called ‘Nurse’s Qur’an’, written in North African Kufic script and at only five lines per page a gigantic tome.

After a welcome reception, we were free to roam the exhibition at leisure and Ertegun scholars could be seen everywhere gazing into the faces of ancient icons and peering into cabinets of devotional wonder. The exhibition concerns the divine but it was a very human experience. As students of the humanities, we were compelled to see a very contemporary resonance in these ancient objects and feel an affinity with the questions and compulsions that have always been part of our shared human experience.