Contemporary History in the Ancient World 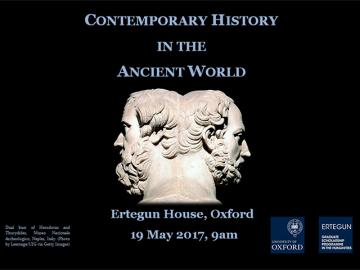 The aim of this colloquium was to bring together scholars to discuss issues relating to the writing of contemporary history in the ancient world – that is, what did it mean to be writing about recent events in the various societies across the vast chronology that makes up our notion of the ancient world? Is it perceived as an asset or a liability to have been an actor in the events described? And how does that translate itself into historiography?

This was a one-day colloquium, with eight speakers during the day, hailing from seven different countries, and presenting on authors ranging both thematically and temporally from Thucydides to Gregory of Nazianzus, covering nearly a millennium of historiographical and literary thought. We were privileged to finish with a keynote address by Professor John Marincola, the Leon Golden Professor of Classics at Florida State University, whose work on Greek historiography has been enormously influential.

The day started with Thucydides, perhaps the archetype of this form of history. We thought about his ‘transcendentalist’ style, and discussed whether this sets him apart from other ‘contemporary historians’, or if in fact he is much like any other. Next came Xenophon: where is the boundary between history and memoire? Concluding that these distinctions reflect modern more than ancient genres, we jumped forward about seven centuries bringing us to Dexippus of Athens, a historian from the third century, whose work survives only in fragments. Excitingly we were able to look at a new fragment, and think about how he seems to have presented himself, as well as other members of the Athenian elite, in his only work of contemporary history. Writing about the recent past, we realised, is a highly social endeavour in these ancient communities.

The second session was made up only of two papers (to prevent any delays to lunch, which would have been a disaster!), one on Cassius Dio and the contemporary Sasanians (looking at how contemporary concerns colour thinking about past threats), and one (given from Australia over Skype!) on Lucian, whose How to write history discusses in humorous terms precisely the issues we were thinking about. Despite a few panicked moments when the call froze, and some minor sound issues, this worked out well, and it was hugely valuable to have access to the facilities to hear the paper despite the author’s travel plans being upset at the last minute.

With a sigh of relief that the technological gods had been broadly favourable, we broke for the traditional sandwich lunch. In the final session, we discussed Velleius Paterculus, traditionally dismissed as a fawning sycophant of the emperor Tiberius, before moving to my favourite sycophant, the Jewish historian Josephus, whose close relationship with the emperors Vespasian and Titus, and involvement as rebel and ‘traitor’ in the Jewish revolt of 66 had been the impetus behind the organisation of the colloquium – and the subject of my MPhil dissertation. The final paper of the day was also the most unusual: looking at the poetry of Gregory of Nazianzus when he describes contemporary events, embracing subjectivity and emotion as evidence of truth – very different from classical historiography.

The day ended with the keynote address on ‘the anxieties of the contemporary historian’: John Marincola took us on a swift journey through Greek and Latin historiography, showing the role that accusations of bias in particular played for historians of contemporary events in the ancient world. This was followed by a wine reception, and then dinner for the speakers and a few enthusiastic attendees.

Overall, the colloquium was hugely enjoyable and valuable – providing engaging discussion and meaningful insights into this part of the field of historiography. Furthermore, the process of organising a colloquium, selecting papers, and sorting out practicalities, was an experience that taught me a great deal, and I am very grateful to have had the opportunity to do this through the Ertegun Programme.