The Fairy Queen by Theatron Novum 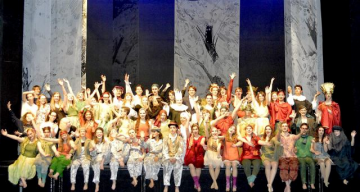 From Wednesday 4th to Saturday 7th May 2016, I sang the role of Corydon in six performances of Purcell’s Fairy Queen in the Oxford Playhouse, with the company Theatron Novum. This experience was exciting and rewarding, for several reasons. With 600 seats, the Oxford Playhouse is the biggest stage on which I have ever performed, and it had not been used for a student production of an opera in many years. Fairy Queen is itself a work of gigantic proportions, since it includes a slightly modified version of Shakespeare’s A Midsummer Night’s Dream, but also a lot of musical numbers, dances, and of course singing—arias, duets and choruses. Theatron Novum’s production involved no less than 70 performers, including actors, singers, dancers, acrobats and musicians. Being part of such a large team was also a new experience for me.

The role of Corydon is quite typical of Purcell’s operatic style; it is a comic role, which has a purely illustrative function in the story. Corydon is a young hay-maker enamoured with Mopsa, who first refuses his advances. The duet is a farce in which Corydon tries to convince Mopsa to give him a kiss, but she affects to flee him before finally giving in to her own desire to elope with him. Part of the comic value of the duet comes from the fact that the role of Mopsa is written for a counter-tenor, that is a male singer who uses the falsetto (high pitched) register of his voice. Dionysios Kyropoulos’ stage direction was excellent, keeping the duet tasteful yet very funny, as evidenced by the generous laughs it elicited from the audience every night.

I was delighted to be part of this adventure, and hope to keep performing in operas in Oxford over the two remaining years of my degree.