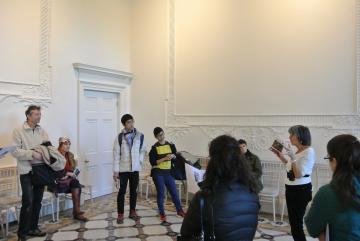 A cohort of Ertegun scholars arrived at Compton Verney on November 26th. Its grounds are stunning—a beautiful house of galleries surrounded by rolling fields of sheep, a small lake, and a few other constructions, ranging from a chapel to an icehouse.

We were warmly welcomed and given a brief description of the property’s origins. Initially the site of an Anglosaxon village, Compton Verney was reimagined, after an already lengthy history, in its current design by Lancelot ‘Capability’ Brown in 1779. The home was restored in 1993 before opening as a full gallery in 2004.

After this brief historical introduction, the Ertegun cohort was taken on a private tour through Compton Verney’s standing exhibit of Chinese Bronzes, where we were able to see pieces created in the many years spanning the Shang to Han dynasties. These vessels served as containers for cooking and holding food or drink, and some were also buried alongside the dead, in order to carry sustenance into the afterlife. A highlight of our tour was the opportunity to handle two pieces of bronze: a weighty lid as well as a more thinly cast—and beautifully inscribed—vessel.

Post-lunch we were given the opportunity to explore Compton Verney’s current exhibitions. A particularly joyous room was the Quentin Blake gallery, filled with sketches and prints of the artist’s work. From his Matilda illustrations to scenes from the children books he himself has authored, the collection clearly displayed Blake’s unique style and the obvious delight he takes in his work.

Perhaps the highlight of our visit was “The Lost Words,” a collaboration between writer Robert Macfarlane and artist Jackie Morris. Before stepping into the exhibition, visitors were confronted with a wall of introduction that provided a horrifying statistic: three-quarters of UK children spend less time outdoors than prison inmates. The result? A vocabulary of plants and animals that is beginning to disappear: bramble, magpie, otter, among others. Each word’s display consisted of an acrostic poem, which spelled out the word, hung alongside three images depicting it—or the lack thereof. The poem’s attempt at active reinscription, coupled with the image of absence in each group of three pictures, placed the hope for endurance alongside a strange sort of preemptive sadness, a premonition of extinction. But in the end, despite the hope, it’s the loss—depicted through images of empty telephone wires, tangles of lines without berries, a wood without bluebells—that sticks with you.

Just before we left, a few of us braved the muddy paths and wandered through fields of sheep that were less than pleased to see us. At the crest of the hill we sat on a bench and looked down to Compton Verney and talked to each other about Oxford and academia in general, what we wanted to do while here and where we wanted to go from here. Eventually, made sniffly by the cold, we followed the path back to the house, stopping to scrape the muck from our shoes at the gate.

Compton Verney is the sort of place that you feel settle into you with each exhibit. Its charm, I think, is its earnestness—every part of the building, the idyllic grounds, the staff are so palpably eager to see you, so pleased that you’ve come. It’s nice to feel warmly received by a place, and, in the midst of a constantly accelerating Michaelmas term, our Ertegun cohort immensely enjoyed the respite. The trip was a good reminder to stay conscious of the brambles and magpies and air that crisps breath into steam—to keep imagination alongside and inside the headiness that animates Oxford.