Reparations for Slavery and the Slave Trade: A Transnational and Comparative History 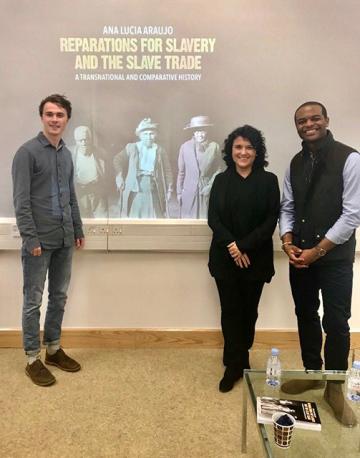 During week six of Michaelmas Term 2017, the Ertegun House hosted a book talk featuring historian and writer Ana Lucia Araujo. Ana Lucia Araujo is Professor of History at Howard University in Washington D.C., and is the author or editor of ten books and nearly fifty articles on themes of slavery, public memory, and diaspora. Her books have been published in English, Portuguese, French, and Spanish, and she has given talks all over the world on the topic of slavery —so we were quite delighted to host her in Oxford. The book talk centered on Araujo’s new book titled Reparations for Slavery and the Slave Trade: A Transnational and Comparative History (Bloomsbury, 2017) and was attended by about fifty members of the University, including several Ertegun Scholars.

Reparations for Slavery and the Slave Trade explores the long history of enslaved and freed individuals conceptualizing the idea of reparations across the globe. Araujo argues that the phenomenon of demanding reparations by present day activists is not a new one, that the enslaved themselves sought redress from their owners and from government agencies. Professor Araujo’s work is the first such book to explore this transnational history of the demands of financial, material, and symbolic claims.

Perhaps the most impressive aspect of Araujo’s engaging talk was her analysis of these themes within a global perspective: she weaved anecdotes and histories from the United States, Brazil, the Caribbean and Cuba. The audience was fascinated to hear about the differences and similarities in the reparation arguments put forth by the enslaved across time and space.

This book talk was a timely one given that many scholars and students at Oxford have been discussing the history of Oxford’s ties to the Atlantic Slave Trade. All Souls College, in recognition of its financial enrichment through the slave trade, recently launched a scholarship for graduates from Caribbean countries to study at Oxford. All Souls will also fund a five-year grant for Codrington College in Barbados. The interest in the topic was evidenced by the turnout of individuals from multiple departments from across the university which made for a lively and interesting discussion. Following the talk, students purchased books and Professor Araujo conducted a book signing while holding conversation with many who stayed for a meet and greet with the author. The talk was organized by Ertegun Scholar Jordan Terry and Jake Thorold, both master’s students in European History.