Khatia Buniatishvili at the Sheldonian Theatre 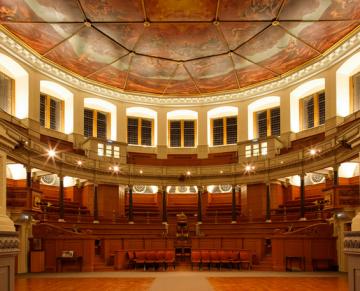 On the evening of October 26, 2017, Ertegun Scholars made their way to the Sheldonian Theatre for a night of Russian classical music performed by the Oxford Philharmonic Orchestra. The program, which notably coincided with the recent centenary of the Russian Revolution, featured Rachmaninov’s classic Piano Concerto No. 2 in C minor and Shostakovich's triumphant Symphony No. 5 in D minor.  It was the first concert in the Sheldonian for many new Ertegun Scholars, and it surely did not disappoint.

The superstar and focal point of the theatre that evening was Khatia Buniatishvili, the virtuoso Georgian pianist known for her dramatic playing and technical brilliance. There is a certain aura and presence about Buniatishvili that seemed to capture the attention of concert-goers in a way I have not witnessed in a long time. Her expressive interpretation of Rachmaninov’s Piano Concerto No. 2 brought no less than three minutes of applause from the theatre. Buniatishvili graciously returned to the stage for an encore presentation of Franz Liszt’s fast paced and folksy Hungarian Rhapsody No. 2. Her encore garnered an equally raucous applause from our gallery and the entire Sheldonian.

The second piece performed was Shostakovich's forty-five-minute Symphony No. 5, and was equally captivating. This militaristic and celebratory symphony is arguably Shostakovich’s most important work and it was quite thrilling for Ertegun Scholars to hear such a famous piece performed live. The philharmonic held their own throughout the evening and especially during the second half of the night. This is especially impressive given the four movements of the Shostakovich’s symphony could not be more distinct in terms of instrumentation, tempo, and emotion. The final two movements were especially striking—the deeply somber third movement, which historians have noted was met with weeping when it was first performed in 1937 in Leningrad, was brilliantly juxtaposed with the rousing and seemingly nationalistic finale. The philharmonic's resident conductor, Marios Papadopoulos, did an outstanding job of navigating the often wandering, but ultimately triumphant piece.

Following an exciting evening of dazzling music, Ertegun scholars were invited to retire to the venerable Kings Arms Pub for a round of drinks and discussion—a very good time was had by all.