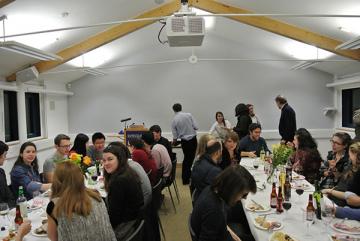 At home, I spent my Thanksgivings in Chicago. We would all gather at my Aunt’s house—cousins, aunts and uncles, people we called aunt and uncle but weren’t, dear friends of the family whose status we felt deeply but never questioned. It was always a motley crew; there was always an extra plate for someone who needed a place to spend the holiday, an extra glass of wine for neighbors who would drop in for dessert. Some might have said our Thanksgivings looked a little haphazard, what with our incinerated turkey and last minute seating arrangements, but growing up, I always thought they were magnificent.

It hit me in early November that this would be the first Thanksgiving I would not be with family; not be at my crazy thirty person reunion in Chicago. My options seemed dire: pick up Lebanese take-out at Little Clarendon and work at my desk or make some popcorn and watch the Charlie Brown Thanksgiving Special. Neither seemed appealing. So I started floating the idea around Ertegun House—what if we had an Ertegun Thanksgiving? People started getting on board. And thus, the first annual Thanks(Mica!)Giving was born.

It is surprisingly difficult to explain to non-Americans the food of Thanksgiving (Jill, for example, could not wrap her head around the idea of sweet potatoes with marshmallows on top, something I have always seen as patently normal). But since our Thanksgiving was going to be a potluck, many people gamely attempted to prepare classic American dishes. Michele, coming from a family of chefs and having spent one Thanksgiving in Colorado, was the obvious choice for the coveted job of turkey-maker. (Plus, he was one of the few Ertegun to have access to a full sized kitchen, which was key to the decision-making process). We sent an American to supervise the cooking of the bird; between Kai and Michele, the turkey turned out fantastic! (I myself am a vegetarian, but having not tasted the bird myself, I can confirm that it was a wonderfully aesthetic turkey.) We got our Southern Americans to take care of some of the classics: Jordan made the most mouth-watering mac and cheese, and Eileen and Lacey teamed up to make not one, but three (!), pumpkin pies. Julia came in strong with the vegetarian sides: a beetroot quiche and some fancy sweet potatoes with maple glaze. And about thirty minutes before Thanksgiving started, I was taking my apple cinnamon crescent rolls out of the oven, just like I would do at home.

Seating required some serious thought: we had about 35 people come to our Ertegun Thanksgiving, more than anyone expected. People brought friends, fiancés, parents; some students even brought their professors! It was a wonderful, wonderful evening, with everyone getting the chance to take a break from end-of-term stressors and eat and talk and relax on a Thursday night. In the middle of dinner, I got up to give a toast, and though I’m not sure all of my ideas came out exactly as intended, what I was trying to get at was this: I’m a firm believer that friends are the family you choose, especially when you’re still young and away from home. The fact that everyone at Ertegun, most of whom had no tie to Thanksgiving, no real reason to celebrate this American holiday, chose to spend their Thursday cooking vegan stuffing, making thirty pounds of mashed potatoes, perfecting a classic South African pudding, or trying to figure out how to make the microwave suitable for baking brie, meant the world to me. It underscored how at Ertegun, I don’t just have amazing, brilliant, and diverse friends. I have a family.

And the next Thursday, our Ertegun Family got together one last time before the holidays for a truly *popping* Oxford Christmas party. It kicked off with a Secret Santa led by Julia, our resident “head elf,” and was followed by mulled wine, mince pies (still something my taste hasn’t adjusted to), and copious quantities of champagne. Everyone, thankfully, seemed to tolerate the holiday playlist Michele and I had made: Mariah Carey, Frank Sinatra, Faith Hill. I was pleased (and vindicated) to note that people even started dancing to the Justin Bieber that I had fought tooth and nail to include in the song rotation. The party was a lovely last hurrah to Michaelmas term; a chance to toast to lovely new friends, a magical new city, and a first term at Oxford successfully completed.