Behind the scenes at the Weston Library 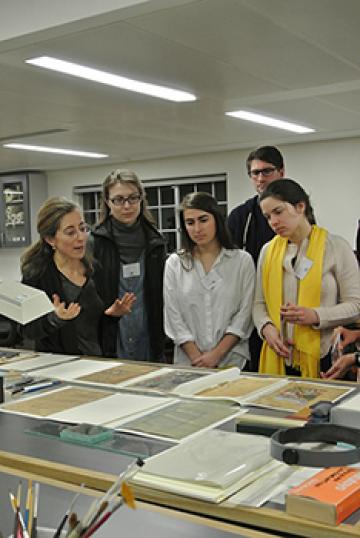 On Wednesday 31st of January, a group of thirteen Scholars made their way from Ertegun House to the Weston Library for a behind-the-scenes introduction to the work of the library’s conservation team. Arriving at the Parks Road entrance just as the winter evening gloom was closing in, we were warmly welcomed by a senior librarian in the building’s expansive minimalist lobby, the first of many testaments to the Weston’s relatively recent renovation, which was completed in 2015; before this renovation, the library was known as the New Bodleian. The new look and feel of the library was the focus of the first section of the tour, which led us through the upstairs Reading Rooms – another 2015 addition, and one which owes a clear debt to the design of the British Library, with its clean square architecture and ubiquitous glass. Our guide emphasised the contrast to the previous form of the New Bodleian, which he remembered as a dense and disorienting labyrinth of windowless stacks; the brightening features of the new incarnation include former doorways that have been converted into large windows looking down at the lobby, helping to provide an overall picture of the building as you walk through it. As we ambled through the corridors, our guide also offered insights into the difficulties of organising and funding the library’s various cataloguing and conservation activities, as well as managing storage space.

Of perhaps even more interest than the building’s renovation was the evidence of its original features, as designed by Giles Gilbert Scott in the 1930s. In deference to the new library’s surroundings, Scott had kept it low by building most of the storage space underground, forming part of the complex of tunnels underneath the Bodleian Libraries. Many details of Scott’s Art Deco style can still be seen inside: a number of the glass and black cast-iron doors are divided into squares familiar from the classic ‘K2’ British telephone box, also designed by Scott.

The ‘ephemera room’ provided an intriguing side-note on the way to the main event, boasting incredibly varied collections of seemingly trivial printed material, from flyers posted through letterboxes to train tickets and business cards. As the tour recommenced, several scholars hung back, seemingly entranced by the room’s minor curiosities, which throw up fundamental questions about the purpose of archiving and preserving in the first place: that is, what makes any document or artefact worth rescuing for posterity?

Once we had reached the main conservation workshop, we were introduced to various specialisms within the broader field of collection care, and to the intricacies of the conservationists’ day-to-day work. The first example took the form of a photography album containing portraits by one of the earliest British female photographers. Not only was the album itself falling into disrepair, necessitating the transfer of the photographs into a new format, but the images are also sensitive to light and inevitably age with exhibition or repeated viewing, leading us again to the question: who are they for? The photographs’ caretaker explained the many factors to be taken into account when considering how access to the images should be controlled. We learned that it is important first of all to decide whether the photos are to be preserved for the next fifty years, or the next five hundred, as this will determine the ‘budgeting’ of access and exhibition time. Possible compromises within these measures include singling out less significant photographs from the collection as exemplars for general viewing, while limiting access to the most precious plates.

Next, we heard from a conservationist who had recently been experimenting with the mixing of an appropriate paint in order to protect hand-painted Japanese illustrations, the white sections of which had begun to discolour and crack. Here, we discovered, a good smattering of chemical knowledge is required, as well as a delicate balance between attention to ‘authenticity’ – trying, where possible, to match the materials used by the original painters – and practicality, since much newer chemical binding agents could greatly increase the durability of paint and paper, without affecting the appearance and texture of the original.

It soon became clear, however, that collection caretakers need not only a grasp of chemistry, but also a good dose of craft. At the next work station we visited, a specialist – paint already mixed – was touching up the ornate gold illuminations of a Persian manuscript with fine motor skills that would be the envy of any surgeon.

Lastly, we were given an insight into the skills and technology required for preventive conservation of the collections as a whole. The expert responsible for this bird’s-eye view showed us the software (and the baffling remote controls) used to monitor dust and humidity levels throughout the Weston’s extensive stacks, facilitating effective cleaning and conservation schedules, as well as provisions for emergency scenarios such as fire or flood.

Despite the imposing sacred texts, however, this particular visit passed without biblical disaster, ending instead with a drinks reception back in the renovated lobby. Here, we could learn more about the various experts’ personal paths into the field. The bare, wide-open entrance hall seemed now in stark contrast to the densely decorative designs of the manuscripts we had been admiring, but with one distinct advantage: it was improved, rather than ruined, by a drop or two of wine.