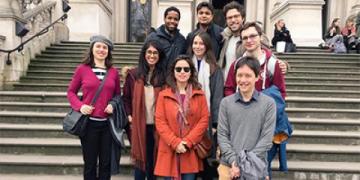 “Winter”, wrote artist Paul Nash, “is life imprisoned”, and while that may have been true for anyone spending the season in the trenches, it did not quite ring true for those of us who were standing before his works that February morning. We, the Scholars in question, were there at the Tate Britain to visit two wildly different, but ultimately complementary, exhibitions: that of Paul Nash, and the famous David Hockney event that sold out before our eyes.

Paul Nash, who began his career at the beginning of the twentieth century but came to prominence during the First World War, was taken by shapes, shapes that do not quite form and shapes that disappear, by “a curious beauty of related forms, whether seen on a dull day or transfigured by the sunlight or the moon”. That the exhibition was arranged chronologically to begin with served to provide an incisive view into the development of the British artist, whose career could be traced slowly, meticulously at first, through an array of “Dreaming Trees” that swayed, towered, and retreated over hills and country mounds, waxing and waning like the moon he so carefully delineated. It may seem strange to begin in the night, but the turn of the earth was what captivated the young Nash, who “lived the dramas of the nocturnal skies—falling stars, moonrise, storms and summer lightning”, who demonstrated “an appetite for monstrous moons, exuberance of stars”, and so the observer began, like the artist, at night. As the Great War dawned, Nash’s subtle style metamorphosed, drawing on stark reds and blinding whites, ragged lines and great washes of colour, to convey the inexpressible. “After the Battle”, “We are making a New World”, and “Spring in the Trenches” are three brimming, endlessly complex examples of Nash’s war paintings that remain simultaneously unified yet diverse. The rest of the exhibition takes the viewer on a breathless ride through the years that followed for Nash, and as he delved deeper into surrealism and abstractism, so, too, did the neat chronology of his work unravel and flitter away into the distance. We learn of his involvement, personal and professional, with fellow artists; his grief, his intense involvement with places around the British Isles; his fascination with and desire to learn from the art of Giorgio de Chirico; eventually, his Second World War work and his preoccupation with time and death towards the end of his life, evident in the sunflower paintings he produced in his final years.

A subdued mood, then, in which to enter the ebullient, Technicolor world of David Hockney, whose own exhibition was bursting at the seams with excited and interested visitors of all ages and backgrounds, ranging from dignified pensioners to delighted art students camped on the floor with pens and pencils. Whilst the bold pinks and dreamy blues of his art stood in stark contrast with the moody, nihilist scenes painted by Nash, both exhibitions served a similar purpose: to inform viewers about the trajectory of an impressive British male artist, and to suggest, but not decisively state, the factors leading to and the effects of the changes they underwent during their creative lives. Present, too, in both exhibitions was the preoccupation with place: in the case of Hockney, who was born in Britain but has spent much of his adult life in sunny California, colour is intimately linked with location, meaning an uninitiated observer can tell within moments that a certain painting is, in fact, set in New York rather than the “sunshine state”. Hockney’s brush does not seek to soften the nouveau riche smugness of the West Coast, but rather amplifies and celebrates its gaucheness, creating an artistic atmosphere that is unmistakeably Californian. In the later rooms, Hockney’s talent at interrogating the multiple perspectives suggested by moving film leads to a series of experiments with montage, collage and many, many Polaroids, culminating in the sheer wonder that is the Four Seasons room, a true celebration of the smaller moments granted us by Nature.