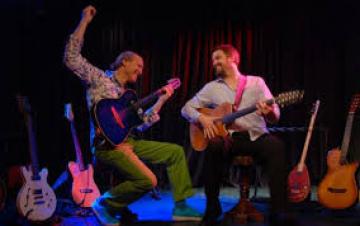 One gloomy Saturday evening in November, our director Ed Herzig took a group of Ertegun scholars to a jazz concert at St Giles’ Church, just down the road from Ertegun House. As we approached the stern medieval façade, I couldn’t help but think that it’s an odd place to listen to live jazz music, but it turned out that the church regularly hosts a range of vibrant musical events. The concert series called “Jazz at St Giles” was established five years ago and has become something of an Oxford institution since then. The gig that we attended was a part of the autumn tour of the Pete Oxley-Nicolas Meier Duo-Quartet, promoting their new album “The Colours of Time”. Oxley and Meier are both guitar buffs and established jazz musicians, and Oxley has been running “The Spin” jazz club in Oxford for some twenty years. In 2012, his club won the Parliamentary jazz award as “The Best Jazz Venue In The UK”.

At their St Giles show, Oxley and Meier treated the audience to some two and a half hours of versatile jazz compositions, most of them original; one piece was even publicly performed for the very first time. The jazzmen both changed guitars virtually from piece to piece, playing on nylon string, steel string, electric, 12 string, fretless, slide, guitar-synth, glissentar guitars, and more. Each guitar was particularly well suited to a specific style of music, ranging from Turkish panache to Brazilian samba. I found the mixture of different types of music intriguing, but also somewhat disconcerting. As an unschooled listener, I had to rely on easily recognisable musical tropes to be transported from a Brazilian beach imagined in one tune to the Turkish bazaar evoked in another. I wasn’t sure how I felt about the facility of this seemingly effortless and unconstrained movement between very different musical traditions that I know very little about. A big part of the pleasure at the concert, however, had to do with watching the musicians carefully handle their precious instruments in between the pieces, as they picked the right instruments for each tune. I have never seen anything like that before, and I now have a new appreciation for the art of guitar making.