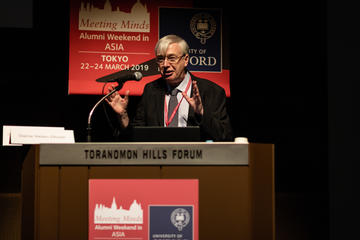 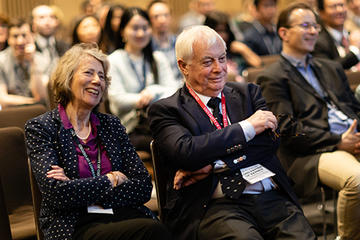 Professor Neil McLynn delivered the Ertegun Lecture at the recent Meeting Minds in Tokyo Alumni Weekend.  Neil compared anti-Christian policies in the Roman Empire to those employed in Early Modern Japan, and posed the question: why did the Japanese succeed in eliminating Christianity when the Romans failed? In writing the lecture, Neil had in mind the Ertegun mission of bringing countries and areas of Humanities research together, which are normally not in conversation with each other.

Neil was introduced by Dame Helen Ghosh, Master of Balliol College, who highlighted Mrs Ertegun’s vision and generosity and how special the Ertegun Graduate Scholarship Programme is to Oxford. Attended by the University’s Chancellor, Lord Patten, as well as around 150 of Oxford’s Asia-based alumni, the Lecture was a good opportunity to raise awareness about the Ertegun Programme within the region.

Professor Neil McLynn studied Classics at Oxford (Lincoln, 1979-83) and went on to complete a DPhil on Roman History in 1988. In 1990 he started teaching in Japan, primarily in the Law Faculty of Keio University (1990-2007; Professor from 2002); he also taught in the Western Classics department of the Humanities Faculty of Tokyo University (1993-2007). In 2007 he returned to Oxford, as University Lecturer in Later Roman History in the Classics Faculty and a fellow of Corpus Christi. His most recent publication is Exploring Gregory of Nyssa: Philosophical, Theological, and Historical Studies (Oxford, 2018), co-edited with Anna Marmodoro.