Ertegun House Seminar in the Humanities; a conversation with Wole Soyinka 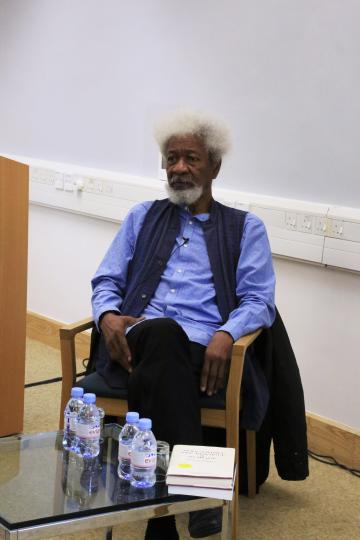 At dinner, where many of my fellow Ertegun scholars were in attendance, I beheld, with concealed wonderment, the legendary gray-white Afro and beard of Soyinka, in all of its enviable magnificence. Soyinka was attired in a loose-fitting sky-blue long-sleeved shirt detailed with small white patterns. Draped over the long-sleeved shirt was a sleeveless indigo jacket that bore striking resemblance to the color of Ẹtù, a Yorùbá woven cloth. In anticipation of the reality of seating next to Soyinka at dinner, I concocted a mouthwatering talking point for facilitating conversation with the famous gastronome. I planned to amuse him with a question about the presence of lyrical descriptions of food and eating in his autobiographies. Take, for instance, Soyinka’s depiction of the pomegranate, in his classic childhood memoir, Aké, as ‘the Queen of Sheba…the passion of Salome, the siege of Troy, the Praise of beauty in the Song of Solomon.’ ‘This fruit,’ Soyinka continues, ‘with its stone-hearted look and feel unlocked the cellars of Ali Baba, extracted the genie from Aladdin’s lamp, plucked the strings of the harp that restored David to sanity, parted the waters of the Nile and filled our parsonage with incense from the dim temple of Jerusalem.’

Soyinka also examines Yoruba gastronomy in his essay-poem ‘Salutations to the Gut,’ and he discusses food and eating in quite a number of his other works of ‘faction’.

And so I unapologetically, and apologetically, tried to monopolize Soyinka for most of the duration of the dinner. Not quite successfully: Soyinka ensured that he spoke to us all. He imparted a particularly entertaining story to me on the subject of mythmaking—a story I have carefully archived in a reliable compartment of my memory. With a vibrant twinkle in one of his eyes, Soyinka described his late friend, Femi Johnson, as a ‘raconteur extraordinaire,’ a person who meticulously planned the contents of his meals, and a major influence on Soyinka’s writings about food. Soyinka also passed on, in a kind of whisper, a story about the portable pepper pot he carries, from continent to continent, stowed away in his jacket. The pepper from this mysterious pot is deployed whenever the need to enliven bland food arises.

Fellow Ertegun scholar, Spence Weinreich, delivered a captivating speech thanking the literary lion on behalf of the Ertegun House. Smiling softly, Soyinka bid the Ertegun scholars goodnight after giving a brief parting speech in response. His warm speech ended with a reference to a line from what I think is a poem by another famous writer. ‘I shall return,’ goes the memorable line.