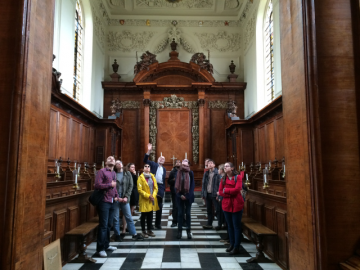 Though theatre trips to London provide an exciting escape from the Oxford bubble, some of the most rewarding events in the Ertegun calendar occur closer to home. College tours are a firm fixture, and the most anticipated took place two weeks ago: Programme Director Bryan’s tour of his own college, Trinity. We started as was sensible: with food. The Butler was more than slightly surprised to see a hoard of students pour into the Old Bursary, where we were served with a delicious lunch of Thai green curry. This was swiftly followed by a dessert of chocolate mousse and amaretti biscuits, and an explanation from Bryan of the port railway, used to pass the port without the inconvenience of having to stand up.

We proceeded to the chapel, which we’d visited a few months earlier during its restoration. Gone were the scaffolding and smell of white spirit; back were the limewood carvings and spectacular Isaac Williams window. We even had the privilege of going behind the pews to view the tomb of the college’s founder, Sir Thomas Pope, and his wife (as well as their dog, if you believe the effigies). Next, a visit to our venerable Professor’s room (though interestingly, Bryan insists on having the title ‘Mr. Bryan Ward-Perkins’ printed over his doorway). The room was just as one might expect a Late Antiquarian’s to be: decorated with pottery shards and even a human skull. Our next stop was, conveniently, opposite Bryan’s room: the Old Library. Notable finds included an early edition of Pride and Prejudice and a set of ingenious library chairs that transformed into stairs.

Finally, up the Tower. The greyness of the day meant the best views weren’t to be had atop the tower, but within it. The college clockwork spellbound the group, while college admissions register, which until relatively recently was written in Latin and listed each member’s father’s profession, tickled us. Though with his encyclopaedic historical knowledge Bryan seems capable of giving a guided tour almost anywhere, it was a pleasure being taken behind the scenes of a place he loves so well.