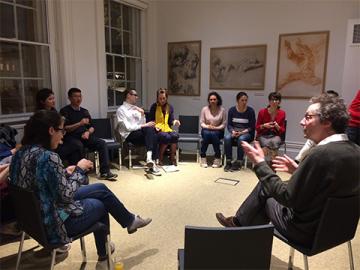 As the network of Ertegun scholars and alumni starts adding more and more nodes, the help extended by older scholars to the current ones becomes even more invaluable. A first-hand example of this connection was provided on November 16th, courtesy of an inspirational seminar on ‘doctoring’ one’s discipline, having ‘mastered’ it. Or, in other words, a fun title for an equally fun session run by three Ertegun alumni, dealing with all the questions we had about doing a PhD, and many questions we never thought we’d have. Ertegun Alumni Tobias, Connor and Mariana each have a link to Oxford and therefore to Ertegun House; their doctoral paths, however, have since crisscrossed the globe in their divergence, offering us both the breadth of experience and the depth of knowledge that comes from speaking to another Ertegun scholar.

The session began where we all are, in Oxford, with Tobias outlining why he chose to continue here—besides the very obvious, doubly stated reason of “it’s Oxford!”. He took us through a very helpful process of finding our red lines, asking questions related to finances, interests, but most importantly potential pitfalls along the way. What happens if your funding dries away when you in fact need a 4th year to finish your PhD? How much teaching do you want to do and how will this impact your research time? How far down the reputation scale are you willing to go to accept a job? There was an impressive diagram underlining this last question, showing the flow of graduates from top universities to other top universities but also to institutions below that bracket, for purely logistical reasons—that’s where the majority of positions are. Tobias also eloquently illustrated the longer-term thought process that should go into making decisions on a PhD, showing us statistics on how many PhD holders go on to earn tenure or tenure-track jobs. Despite the multiple warnings, this was not a talk to dissuade us, but merely to endow us with the critical reasoning for making the best possible decision.

Connor and Mariana followed in a similar vein. Representing Europe but more specifically Ireland, Connor talked about his decision to leave Oxford after not feeling as settled here in the course of his one-year MSt as others may have. Being able to hear such a different perspective was much appreciated by the scholars, as not everyone would be comfortable speaking about the less positive aspects of their Oxford experience. Nevertheless, Connor reinforced a variety of Tobias’ points and stressed that one should never consider a PhD offer that isn’t fully funded. Mariana then took the floor and distributed a useful handout to everyone, prefacing her talk about the US experience. Applying both to the UK (UCL) and to the US, she had chosen the New York Institute for Study of the Ancient World for a variety of reasons, chiefly money and independence. As we found out, most PhDs over the pond take roughly 6-7 years to complete. This was something some of us initially regarded as a disadvantage, but to Mariana it was a very helpful thing. If you haven’t quite narrowed down what you want to study, a PhD like this is for you. If you want to have time to learn the languages you need for your expertise area, a PhD like this is for you. If you want to teach and not feel desperate about handing your work in at the same time, a PhD like this is for you. Or so Mariana argued, but in a very persuasive manner. Another key point of her presentation was the salary-like stipend PhD candidates receive in the US – substantially higher than stipends on the old continent – that one can live rather decently off.

The presentations soon sparked a multi-pronged discussion as current PhD scholars at Ertegun were asked for their thoughts and any further advice. Topics such as taking a year off before applying to the PhD and the benefits of staying on at Ertegun House as DPhil resident alumni were covered with enthusiasm, before the conversation broke into smaller pockets as we relocated to our usual restaurant for dinner. In sum, all of us had something to take away from the night, and connections with the alumni were strengthened. The privilege of having such friendly and erudite minds coming back to guide some of us on our way to the PhD is just another reason why the Ertegun Scholarship is simply the best of its kind at Oxford. Generous and truly caring: a scholarship with a soul.