On one of those special Oxford days when the sun peeks through the clouds, a small group of us met outside the House to set off on a walk. Gervase had recently introduced the Director’s Walks, a socially-distanced activity during the pandemic. We were to set off into North Oxford, located between the city centre and Summertown, a neighbourhood on our Ertegun doorstep. Yet what we thought would be an ordinary walk stretching our leg and brain muscles turned out, instead, to be a promenade through history.

Gervase’s first time capsule was the Radcliffe Humanities building. From our reactions it seems that the memory is being lost that this was once the Radcliffe Infirmary, a hospital built between 1759-1770, funded by the trustees of Dr John Radcliffe. Its construction was followed by the nearby Radcliffe Observatory (1772-1794), a loose replica of the Classical/Hellenistic-period Tower of the Winds in Athens, whose Oxonian version is a distinctive feature of the town’s cityscape. As its name suggest, the building that now houses the upper tea room of Green Templeton College was once utilised by astronomers to explore the skies. Awed surprise followed, and then – ‘of course!’ We looked down Woodstock Road to St Giles’, lined with university buildings, and Gervase told us that during the construction of the Infirmary and the Observatory the area was countryside exploited by cottage farmers who fed the growing city centre. This began to change when wealthy families started to move into northern Oxford, first in pockets of Summertown in the early 19th century and then more extensively into North Oxford from later in the century. 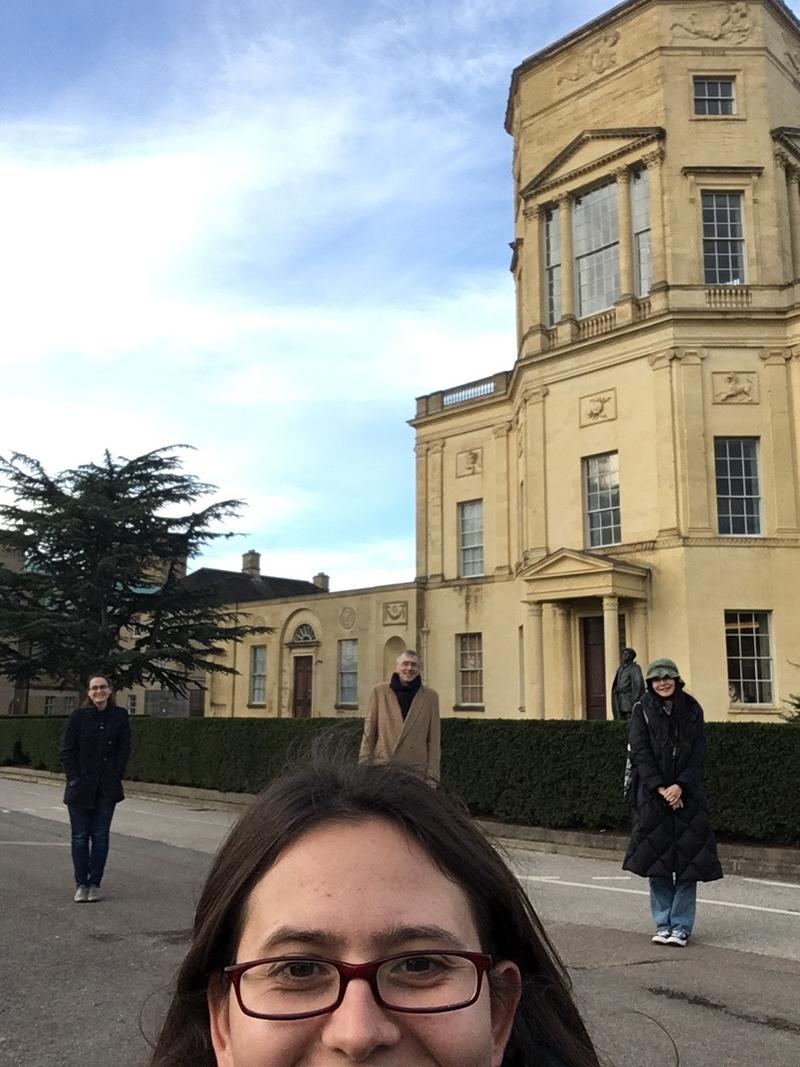 Ertegun Alumnae, Ursula Westwood and Linqing Zhu on either side of Ertegun Director, Gervase Rosser, with Ertegun alumna, Nefeli Pirée Iliou in the centre, outside the Radcliffe Observatory

Strolling into Park Town, Gervase indicated the Victorian Regency-style, Italianate suburban villas with their stables (today detached houses) and the crescents (built in 1854-1855) that marked North Oxford’s first significant suburban construction. This came after plans for a workhouse (1849) and a railway branch were considered, but rebuffed by the citizens. The upper middle class that had been making its fortunes in growing town businesses followed the arrival of the elites to Park Town, but social distinctions required that their houses had to be separated. This led to the creation of a longitudinal stretch of garden known more recently as ‘The Jungle’ (following its caretaking by an Oxford Professor of Botany and founder of ecology, Charles Elton), now under Gervase’s care. It wasn’t, as we had expected, the migration of Oxford dons (who had the right to marry in 1877) and their families that spurred this first phase of the development of North Oxford, but wealthy tradesmen and elites. In the mid-late 19th century, though, the area was neither rural nor suburban, but a middle ground that made for a dangerous walk into town on foot (if you could not afford a private carriage). Gervase told us a story of a late-19th-century resident of Park Town who, to protect himself from highway robbers, strolled into town with a shotgun. How different his walk, we thought, would have been to ours.

Over time the Victorian Gothic houses typical of North Oxford were built, which have since the late 1800s been populated by academics (including famous ones such as J.R.R. Tolkien), professionals, diplomats (like T.E. Lawrence) and more recently by wealthy London commuters and movie stars, or used by Oxford colleges and private schools. As we walked past them I noticed the architectural obsession, on their porches and along their windows, with miniature colonnettes, whose capitals very loosely incorporated ancient orders, like the Ionic, Corinthian or composite orders; these capitals had been re-imagined through the ages to arrive at their manifestation, in miniature, within the domestic realm of the Victorian Gothic. They were used as mullions or pilasters on window frames, sometimes relatively faithful to the original concept of the order and at others far from it, with poppies in one case added (as an ancient architect turned in their grave).

At the newly constructed entrance of Lady Margaret Hall (completed in 2017), two architectural features drawing from specific moments in antiquity were faithfully reproduced. On either side the entrance was supported by swelling, convex columns (like the cigar of a movie villain) with Doric capitals, closely resembling those used in Greek Archaic temples, like those of Agrigento (modern-day Sicily). The columns supported a pediment with cylindrical openings like those of the late Republican Tomb of Eurystaces the Baker, near the Porta Maggiore in Rome. The juxtaposition of rather faithful copies, unlike the re-imagined colonnettes in Victorian Gothic buildings, made for an astonishing example of diachronic postmodern architectural recycling.

In our walk we discovered rich details of our neighbourhood, hidden like little treasures in the buildings only minutes away from Ertegun House. Their history came alive through Gervase’s narration and gradually we became attuned to more. A red kite (recognisable by its kite-shaped tail) visited, flying above the rooftops, and in the University Parks Lin showed us one of her beloved trees, whose trunk is heart-shaped. While many cultural activities may be restricted during the pandemic, a silver lining, now that we have incorporated in our routines daily neighbourhood walks, is this awakening to the enriching details and the stories, previously unnoticed, which are just at our fingertips.