From the walk Janice and I took on last November 10th with Gervase through Jericho and along the Canal, two memorable details stand out.
First, Gervase told us the story of the house owned by his friend at the corner of Walton Crescent and Albert Street which is vividly painted with ladybirds, mushrooms, and vines. One day, a stranger knocked on the owner’s door and asked if the garden needed to be tended. Though she told him that the garden did not need tending, the owner was a kind woman and didn’t want the stranger to leave disappointed. So, the owner gave the stranger the job of touching up the paintwork on the outside of the house. When the owner next came out of her house, she discovered with astonished delight that the stranger had painted the house with the vivid fairy-tale ladybird, mushroom, and vine patterns. 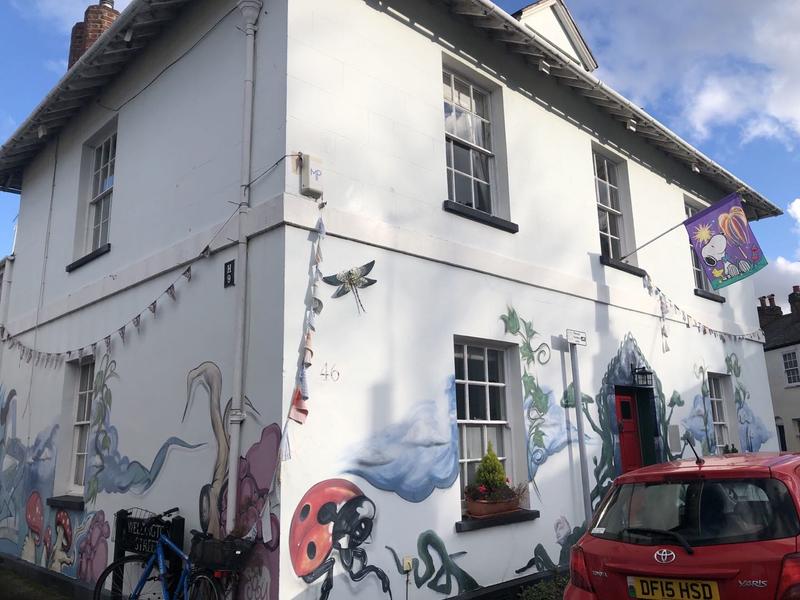 House at corner of Walton Crescent and Albert Street, Jericho

Second, we took a tour of the totally exotic St. Barnabas Church. As Gervase pointed out, its interior design had a strong Byzantine influence. This was a new world for me--“Byzantine.” I wondered, what does this “Byzantine” style mean? When I visited Greece two years ago, Nefeli recommended that I visit the Byzantine Museum in Athens. I remember from my visit a lot of aged colours and a lavish use of gleaming gold that conveyed gravitas--a strong sense of the sacred, divine power, and solemnity. I felt the same reverberations at St. Barnabas. I later learned that the rounded arches along the walls were characteristics of the European Romanesque style, which in this nineteenth-century building are mixed with elements, including mosaics, from Byzantium. I was most struck, though, by the semi-circular ceiling at the end of the aisle. The decorative surface depicted a dark blue starry sky with a golden human figure hovering in the middle. 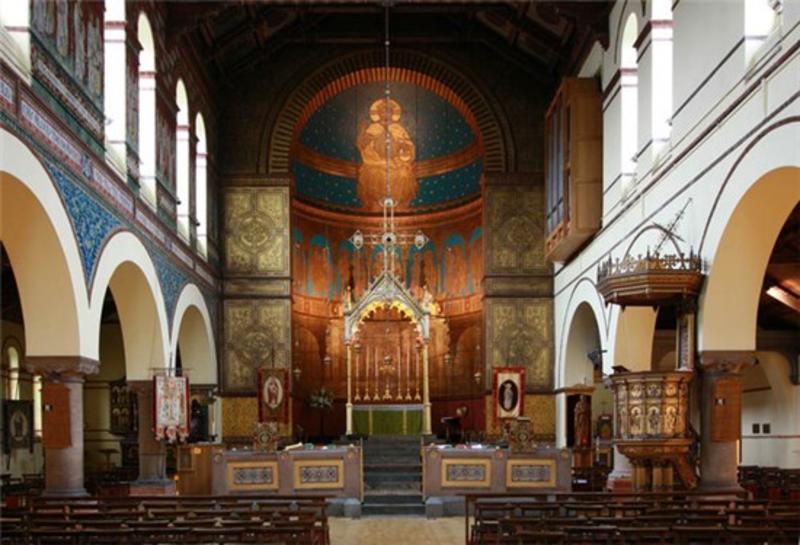 When I saw it, I recalled the cobalt blue ceiling of Mary’s house in Fra Angelico’s Annunciation and Expulsion of Adam and Eve from Eden that I had previously seen in Madrid’s Prado Museum. I wondered why the colours of the ceiling at St. Barnabas seem more aged while the Fra Angelico paintings, as I recall, seemed fresher, livelier, and a more vivid hue of blue. I also wondered why, though beautiful lines about starry skies can be found in Chinese poetry, there are hardly any starry night scenes in Chinese paintings. When in ancient times there was no electricity, people from East and West surely could equally enjoy beautiful starry skies at night, but they are, for reasons I am not yet aware of, treated differently by their respective artistic traditions.