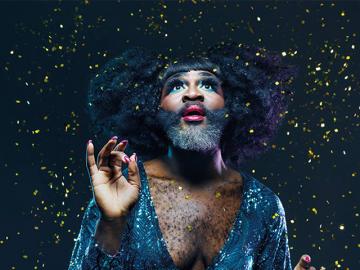 “Twelfth Night,”, another Scholar remarked last Monday, “is very difficult to get wrong.”

He was, of course, correct. Twelfth Night is a play so sparkling, so universal, that it is a popular choice for schools participating in the Shakespeare Schools’ Festival: as I personally experienced twice during my own schooldays, a decent handle on comic timing and an understanding of what the lines actually mean are all you need for a pleasing performance. Emma Rice’s production, however, which we saw with the Ertegun House at the Globe in London, does not demonstrate even passing familiarity with either of these, with the result being nothing short of disastrous.

To introduce the concept, if indeed there was one: 1979, somewhere in Scotland. This much, at least, was clear, although my fellow theatregoers were never entirely sure of why these choices were being made (why would a cruise ship sink near the Scottish coast?). The opening dance number communicates that this is intended to be a camp, joyous romp through the play text, but it quickly becomes obvious that the countless bombastic musical routines and constant high energy, which barely allow the cast or audience a moment of breathing room between each farcical scene, are stretched far too thin to conceal a production that is, at is core, hollow. All nuance, all subtlety is abandoned in this performance in favour of eliciting cheap laughs: Malvolio shrieks anachronistic lines about latex allergies; Olivia begins to strip off in front of Viola despite the stunning absence of any prior chemistry between the characters; Orsino, reduced here from amusing pathos to base ridicule, dances around the stage holding a large fish. It is a clear testament to Rice’s understanding of Shakespeare that the genuinely funny elements of the original text (including most of Maria’s forged letter to Malvolio) are completely done away with in favour of lazy slapstick, often predicated on generating laughs through recognition rather than true comedy (such as the unnecessary insertion of lines from Survivor’s “Eye of the Tiger”). It does not feel fresh and updated; it feels patronising.

This uneasy feeling is not improved by Rice’s fast-and-loose handle on the text itself: I could understand the replacement of “My brother, he is in a watery grave” for the traditional “Elysium” at the beginning of Act One, though the beautiful echo between “Illyria” and “Elysium” is thereby lost, but having Viola eagerly announce that she took “great pains to con” her song before playing a tape recording is, frankly, insulting. There is no requirement to keep a word if the director fears the audience will not understand it, but ignoring its meaning completely only succeeds in creating a jarring, awkward sensation. Most of the textual alterations achieve the same effect: performing Feste’s Song at the beginning of the play feels anti-climactic at best, and Sir Toby (Tony Jayawardena) and co.’s faux-feminist insistence on the correct pronunciation of “Maria” is weirdly incongruous with their otherwise insensitive antics.

Perhaps I was already a tough customer for this particular show, having seen (and loved, albeit with a few reservations) the National Theatre’s bold, innovative offering starring Tamsin Greig as Malvolia, but it does provide a useful point of comparison. Indeed, there were a number of similarities between the two productions that certainly raised my eyebrows and were not lost on other Scholars: certain lines were played in the same way, certain props (Orsino’s heart-shaped balloon and teddy bear, anyone?) made a repeat appearance, but the most striking elements common to both plays were the casting of two young black actors as Viola and Sebastian (Anita-Joy Uwajeh and John Pfumojena at the Globe), and the integration of a black drag queen into the performance, which necessarily invokes questions around race, gender, and sexuality. In the case of the National, it was clear that Simon Godwin had carefully considered these issues: the Elephant pub transforms into a smoky, edgy haven of queerness, at the centre of which the futuristic, ethereal drag queen croons Hamlet’s famous soliloquy; the campaign led against Malvolia takes on a homophobic, misogynistic tension, forcing the audience to reconsider their amusement at seeing the famous laughing-stock, now a (bossy and irritating, yes, but ultimately vulnerable) woman, driven to despair and tortured in a dark madhouse.

Watching Rice’s production, however, gives the impression that precious little thought was put into the equivalent artistic decisions: this time, Feste is reimagined not as a woman but as a black drag performer in a marvellously glittering golden dress (Le Gateau Chocolat). While this casting initially seemed to have a lot of potential, Rice has Feste spending the majority of the first half aimlessly ambling around the balcony level of the stage, presumably to play up the omniscient side of the character that, even in the most conservative adaptation, transcends its own bounds, as is the case with all good Shakespearean fools. Feste’s interaction with Sir Toby’s group is also significantly reduced, again (we assume) in an effort to elevate the fool above the plane of the play’s main action. However, this means we only realise this character is actually Feste relatively late in the first half, and a witty, sharp voice against the indulgent chaos of the play is silenced. The move to cast the drag queen as a tacky cruise ship performer, moreover, while the National situates them within the joyously and unashamedly queer context of the Elephant, permits an unintentional flash of insight into the role of queer culture for this director: where Godwin created oases of queer celebration that radiated outwards into the rest of the play, Rice sees queer culture as a commodity to be presented as entertainment for a straight audience.

This attitude is evident throughout: Rice attempts to invoke the same hazy relaxation of gender and sexual norms that Godwin succeeds in doing, but then creates not one, but two portrayals based entirely on conventional notions of failed masculinity, in the characters of Sir Andrew Aguecheek and Malvolio. Rice’s Sir Andrew (Marc Antolin) is a pink-clad, lisping fool, whose comedic effect is intended to come solely from his love of Monster Munch and his effeminate demeanour; Katy Owen is a shrill Malvolio and not, as in the National, a woman, but merely a woman playing a man, inviting us not to reconsider our understanding of the iconic character, but to laugh at his ‘pansy walk’, uncomfortably and ignorantly reminiscent of homophobic portrayals of camp gay men. The contradiction is clear: queer culture is ripe for commodification, to be deployed as a gimmick in order to lend an extra edge of cross-dressing and gender-play to the playbill, but this takes place without the intense questioning of gender and sexual norms that made the National production so interesting, and so half the play attempts unconventionality while the other half remains firmly rooted in tired and vaguely queerphobic expectations of how men should act and speak. Rice attempts to have her cake and eat it, but the result is one-dimensional and insulting.

This lazy attempt to invoke a queer aesthetic, coupled with the obvious imbalance between the young, attractive Viola and Sebastian, and aging, absurd rockstar Orsino (Joshua Lacey) and schoolmarm-esque Olivia (Annette McLaughlin) respectively, which succeeds in producing precisely zero sexual tension onstage, made for a dull and exhausting first half. I had little desire, after the shambolic and badly-directed box-tree scene, in which the tricksters spend most of their time sat on the floor in full view of Malvolio, to see the famous cross-garter episode; neither did I want to witness two awkward unions between young, black, and ultimately powerless characters stranded abroad and their older, white, rich counterparts, and I certainly did not have the energy for more shouting, shrieking and fishing for easy laughs, so I left at the interval. I regret that it came to this, but an hour and a half of peace and quiet on the X90 back to Oxford was infinitely preferable to what promised yet more boredom and irritation.

It is a shame, given that there are so many ways to work with this play and present a successful adaptation, that this fails in so many ways, but it is perhaps for the best that Emma Rice will no longer work with the Globe. Twelfth Night may be hard to get wrong, but this production does just that.