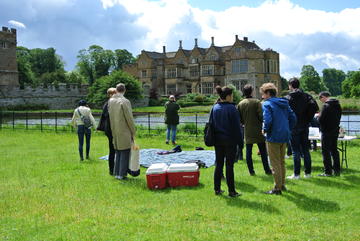 Is the institution of British aristocracy still morally feasible today? Is it right that so few should be accorded such an abundance of wealth, land and social prestige, only because of their good fortune in being born into a historically privileged pedigree? Does your castle even have a moat?

Regardless of your stance on these thorny issues, our tour guide Martin Fiennes (a.k.a. Martin Twisleton-Wykeham-Fiennes), the current owner of Broughton Castle, was an excellent spokesman for the nobility of middle England. For someone whose family tree dates back to the 12th century, his charm, wit, and easy manner was perhaps surprising. His youngest son had recently hosted an 18th birthday party in the castle, whose casualties were only one broken 19th century chair and a medieval breast plate (eventually retrieved); his eldest son we had the honour of meeting as he fell out of bed and into the Queen Anne bedroom, which we were then admiring for its exquisite portraiture and definitely-not-sagging-ceiling.

The castle itself may or may not have played a part in shaping modern liberal society, if not in containing the famed 'room with no ears' in which Parliamentarians plotted before the civil war, then definitely because it was the venue for the filming of Shakespeare in Love (1998).

The historical gravity of the house was surely not lost on any of the Ertegun scholars; its significance was impressive at every turn. But between the squalls, sudden deluges, and moments of blinding sunshine, most of us were just happy that our picnic blanket didn't end up in the moat.