Breaking Down the Walls of the Museum: from Kabul to Washington D.C., via Sogdiana 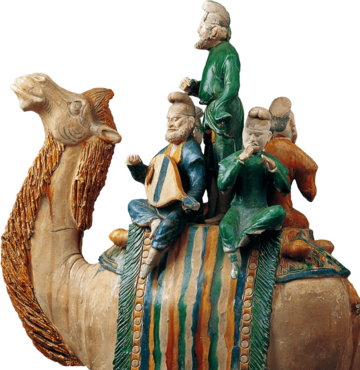 Thomas Wide has lived an awful lot for someone his age. In a breathless and engaging talk at the Ertegun House he gave us a compressed version of his curriculum vitae since earning his degree in Classics and Arabic from Oxford a little more than a decade ago. While some go on to graduate schemes and others into the workforce, Wide went straight to Kabul, where at the ripe age of 21 he was given a central role in Rory Stewart’s cultural heritage NGO, Turquoise Mountain. At Turquoise Mountain, Wide helped revitalize the Murad Khane neighbourhood of Kabul’s Old City, an area condemned by a modernizing government in the ‘70s and turned into the city dump. The organization cleared thousands of tonnes of trash and rubble from the streets and oversaw the restoration of the area’s traditional wooden buildings, putting numerous labourers and skilled craftsmen to work. At the same time, Wide and others built relationships with traditional craftspeople and recruited many to teach at the Turquoise Mountain Institute, a school they helped found for traditional arts and crafts in several of the restored buildings. In a war-torn country, what was once seen as a relic of a benighted past was transformed in the popular imagination into a symbol of Afghanistan’s cultural richness.

Somehow, in between meetings with community leaders, Afghan government officials, and foreign donors, Wide found time to become Dr Wide, writing his DPhil (under Professor Herzig’s guidance) on 19th century travellers’ narratives of Kabul—largely from a hut in Afghanistan. He told us that he wrote more quickly, and with greater pleasure, while juggling academic commitments with his day job as, by that point, Managing Director of Turquoise Mountain. He suggested that his love for engaging with real-world problems was one of the reasons that he did not ultimately pursue an academic career. Fortunately he had another opportunity: after putting on a show at the Freer|Sackler museum of Asian art in Washington D.C. (part of the Smithsonian Institution) about traditional Afghan crafts, featuring the work of the potters, weavers, and carpenters he met in Kabul, Wide was invited to join the museum as Assistant Director.  Dr Wide helped raise the profile of the Freer|Sackler, boosting attendance through public events and encouraging the museum to embrace digital media, most notably in the Smithsonian’s first fully-developed digital exhibition, The Sogdians: Influencers on the Silk Road.

After just a few short years in D.C., Wide was tapped by the Smithsonian to manage their collaboration with the Victoria & Albert on a jointly-run museum in the Olympic Village in West London, set to open in 2020. Unlike traditional outreach ventures that close up shop after a single exhibition, Wide hopes that the museum will  become a permanent and deeply-rooted presence in the community it is meant to serve. To that end, Wide is spending much of his time getting to know West London, meeting members of the community and learning about how the unique resources of the Smithsonian and the V&A can match their unique interests and needs.

Much like the traders on which he wrote his dissertation, then, Wide is a mediator: between governments and NGOs, museums and their publics, the rich and powerful guardians of cultural capital and the less rich and less powerful beneficiaries of it. What was most impressive to me about Wide’s career was not so much his precocious accomplishment as his careful attention to the balancing the interests of the many parties involved in the complex projects he has overseen. As he explained, he has the academic credentials to be taken seriously by the institutions in which he works, as well as the care and openness to be respected by the publics they serve. He frankly acknowledged the risks involved in outreach and philanthropy—of orientalism, of developing or representing a community in a way that ultimately serves the backers of a project rather than its opposed beneficiaries—and reiterated that these were problems that he frequently considers and rethinks.

Many of us were interested to learn about transitioning from the academic to the non-academic world, and asked Wide about this. He said that what was most useful about his DPhil, besides the credibility it bestows, was the practice in problem-solving that it gave him. Upon reflection, another, perhaps slightly obvious point emerges from Wide’s story: Our academic work is often insulated from the public, written for the objective, impersonal space of scholarship, but Wide has been able to mobilize his learning in the service of real people and their real communities. Alongside the work-ethic and attention to detail of a scholar, a curator and particularly a museum-creator has to have the curiosity of a journalist, the creative vision of a film producer, and the risk-appetite of an entrepreneur. Just like writing articles and giving lectures, these skills must be learnt and practiced.

Dr Wide’s well-practiced people-skills—not to mention a dash of charm—were on full display over drinks after the talk and then over dinner at Al-Andalus, where he made sure to introduce himself to each one of us and was eager to learn about our work. All of us went home feeling a bit more energetic, and perhaps also a bit more adventurous, than before.