Behinds the Scenes at the Ashmolean - The Cast Gallery 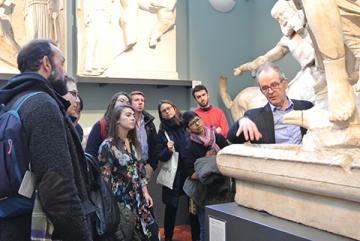 Oxford is a city of museums as much as it is one of books, and on Friday 26th January the Ertegun scholars were invited to enjoy a behind the scenes tour of a one of the most fascinating collections to be found anywhere in the city, or indeed the country. The Ashmolean Museum was founded in 1683 and was the world’s first University museum, specialising in collections of art and archaeology from across the world. A jewel within this collection of collections is the museum’s cast gallery, which houses over nine hundred plaster casts of some of the finest examples of Greek and Roman sculpture. Professor R.R.R. Smith, curator of the cast gallery, Lincoln College Professor of Classical Archaeology, and one of the foremost scholars on Hellenistic sculpture, kindly took the time to give the scholars a whistle-stop tour of some of the most iconic sculptures of classical antiquity.

Starting with a remarkable feat of both engineering and art, Professor Smith introduced the scholars to a cast of a sculpture of the Greek goddess Nike, originally set atop a nine metre podium in the Sanctuary of Olympia during the late fifth century BC. The scholars were encouraged to think about the context in which the sculpture was set – a competitive atmosphere where various Greek city states competed via their elaborate dedications – and to investigate the smallest details of the statue which revealed the true craft of the sculpture, from the taut tendons of the goddess as she lands on her tiptoes atop the podium, to the diaphanous nature of her dress indicating the wind pushing it against her sensually depicted body.

Next the scholars were shown a slightly less elegant, yet no less skilfully rendered, sculptural relief from a monumental temple at the site of Pergamon in Western Turkey. Here the brutality of classical sculpture was noted, with this piece offering an interpretation of a giant desperately defending himself from a vicious quadruped by attempting to gouge the attacker’s eyes from it’s skull. Every element of the original sculpture was shown to have been replicated perfectly, from the fractured fingers of the giant to the somewhat amusing tufts of armpit hair added to his body to indicate his barbaric nature.

The tour continued through various examples of classical sculpture, functioning rather more as an interactive class than a staid explanation of gallery pieces, eliciting much response and enthusiasm from the scholars. Of particular enjoyment was the explanation of a veristic sculpture of an aged fisherman, which was discovered at the site of Aphrodisias which is excavated by Professor Smith, and partly funded by the generosity of Mica and Ahmet Ertegun.

Finally, the scholars were taken to the very bowels of the museum, where many hundreds of casts which cannot be exhibited to the public due to a lack of proper space are stored. Amongst this forest of statues, the scholars were given further instruction in the techniques and styles of the collection, ranging from severe portraits of emperors and philosophers to a somewhat more comical depiction of a small child strangling a goose – such is the idiosyncrasy of classical sculpture.