Behind the Scenes at the Weston Library 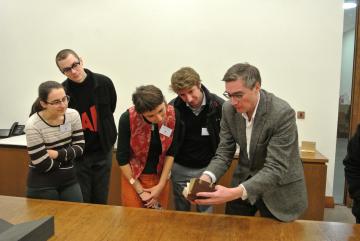 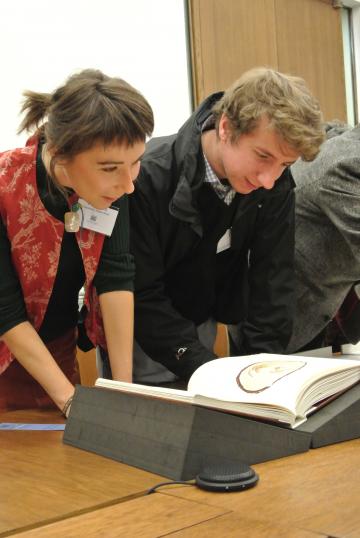 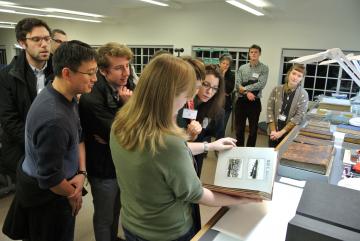 "There are few greater temptations on earth than to stay permanently at Oxford in meditation, and to read all the books in the Bodleian."

These words by Belloc, that prolific Anglo-French writer of the early twentienth century, remind us of the romantic ideals of the Bodleian Library sold by so many picture-perfect Oxonian postcards. And indeed, you cannot spend time in the hallowed halls of the Bodleian without wondering what mysteries lie hidden in its shelves and what tales remain within, untold for centuries, waiting to be read anew by a fresh pair of eyes. When you sit in the Radcliffe Camera, caressing a sunlit tome in your lap, you realise that you are given the privilege to drink from a sea of knowledge, one that would slake your thirst while making you thirst ever more.

This dreamy experience that one has of the Bodleian is, of course, juxtaposed next to the often-prosaic reality of student life. There is nothing one dreads more than seeing a book of required reading listed in the Bod’s catalogue as only being available in “Lower Gladstone Link” and nowhere else in Oxford, and then having to spend a sunny Saturday afternoon squirreled away, a few storeys underground, in a windowless storage facility of books. This experience, sad to say, is more common than not for students of theology (like this author). Our modern theological monographs appear to receive the same fate commonly had by their ancient scriptural counterparts—they get buried in the earth.

Where this author does not get to go, however, is the Weston Library, part of the Bodleian family of libraries. And so, when the Ertegun programme of events advertised a “Behind the Scenes Look at the Weston Library”, I was ready to have my idealistic vision of the Bod reinvigorated. We were honoured to be led in this evening tour of the Weston by Richard Ovenden, Bodley’s Librarian (the senior executive of the Bodleian), and Chris Fletcher, the Keeper of Special Collections.

The tour began with a visit to the purpose-built facilities of the conservation department, where numerous conservators showed us how they preserved the treasured volumes that lay within the Bod. I was thrilled by the careful choice of materials used to mend the books, and the special techniques used, some of which were invented at the Bodleian. The wide range of materials under conservation was intriguing too, ranging from a sketchbook of beautiful drawings by Felix Mendelssohn (as though his musical talent was not enough!) to a photo album of a family living in Oxford in the nineteenth century (Oxford has not changed very much).

Thereafter, Dr Fletcher led us to a room where he showed us a number of books representative of the broad range that made up the Bodleian’s Special Collections. This started with a look at a German psalter written ca. 1500 by the nun Margaret Hopes in the Cistercian convent of Medingen near Lüneburg. He regaled us with the story of how the Bodleian obtained this beautiful devotional item, and even allowed us to handle it with care. As you looked inside, you knew that the book was something intensely personal and cherished. It was well-used, yet great care had been taken by its user to protect it.

Following this, he showed us a number of other artefacts, including a remarkable work handmade by the Bodleian’s 2017 Printer-in-Residence Russell Maret entitled Interstices & Intersections or, An Autodidact Comprehends a Cube based on 13 geometrical propositions from Euclid’s Elements. It was a stunning and creative blend of words and images, used in synergy, to produce a visual feast. Adding to its impact is the book’s binding—the book is bound so that the pages can be opened up side-by-side stretching over more than 5 meters.

However, my favourite book among those that Dr Fletcher presented would have to be the sketchbook of a child living in England in the early twentieth century—though “sketchbook” might be a significant understatement, for the child drew with an astute eye and with great skill. Due to this, the sketchbook serves as a clear-eyed historical witness to an earlier time, hence its importance. Yet children are children, and the centre-piece of the sketchbook—Dr Fletcher’s personal favourite—was a marvellously-drawn Christmas pudding which dwarfed the plate it sat on. Its outsized proportions spoke volumes about how all children see pudding.

Following all this, we adjourned to Blackwell Hall for some wine (or as Richard Ovenden reminded us, “adult drinks”) and a chat with the librarians. It was a fitting end to an enchanting evening. As I stepped out of the Weston, and walked towards some dinner, I looked over at the Bodleian Library. It looks better in the dark, I think, for darkness is where knowledge shines brightest. 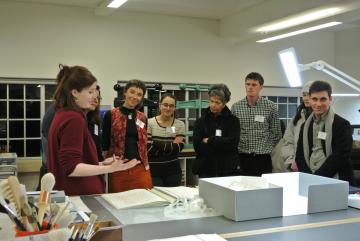 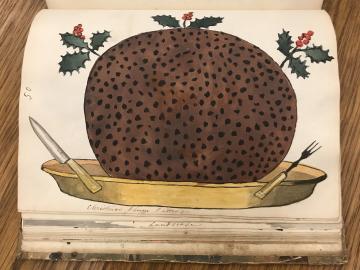