Behind the scenes of the Ashmolean Museum 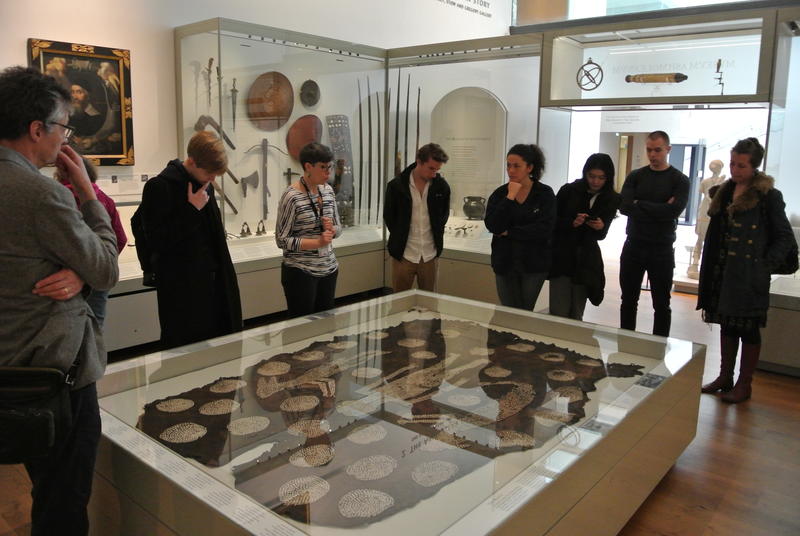 Ertegun scholars frequently enjoy visits to the Ashmolean to explore new exhibitions and for ‘behind the scenes’ viewings of the museum’s collections. On this occasion, however, the object of the visit was somewhat different, with the scholars being given a tour by Dr Eleanor Standley of a recently opened gallery focussing on the fascinating history of the museum itself.

Opening in 1683, the Ashmolean Museum initially consisted of the collections of Elias Ashmole, which were donated to the University of Oxford in 1677 on the condition that the University would build an institution around these collections to further learning and advancement of knowledge. Ashmole was a hugely successful social climber of a relatively humble background. A royalist who benefited greatly after the restoration of Charles II in 1660, he amassed an extensive collection of curiosities. Whilst the Ashmolean Museum is now best known as a centre of antiquities, the collections of Elias Ashmole focussed equally on the natural sciences and items of contemporary ethnographical interest, and these items are presented prominently in the new gallery.

Dr Standley first explained the concept of the gallery, which begins with a reconstruction of the layout of Ashmole’s ‘garden of curiosities’, lined with Roman statuary and gravestones. As we progressed from this outer ‘garden’ into the main gallery we were greeted by a truly bewildering selection of objects, some of which were collected by Ashmole himself and others which were acquired when he was given the collection of the Tradescant Family – notorious collectors of natural and man-made curiosities - in the mid 17th century. The variation of items on display was impressive: Egyptian relief plaques, gigantic murex shells, early Medieval English sculpture. The stories behind some items, however, made them unforgettable. Particularly pertinent to the life of Ashmole himself were items related to the English Civil War. In one display case was a wide-brimmed hat with a protective steel band allegedly worn by John Bradshaw, the judge who sentenced Charles I to death, and next to this hat lay the studded leather shoe of his executioner. Now only a few feet away from these most English of items lie ones which at the time would have represented one of the most alien cultures imaginable to Ashmole and his peers. In one case perhaps the oldest complete example of indigenous North American clothing, and taking the central spot in the gallery, a case housing the unique Mantle of Powhatan. This huge deer-hide hanging with shell decoration dates to the early 17th century, and may have been given by a leader of the Powhatan people to Christopher Newport, a leader of the early British colonists who founded the settlement of Jamestown.

Museums tell stories to their visitors, but it is often easy to overlook the stories of the museums themselves. The Asmolean museum is certainly a museum with a remarkable personal biography, and the new gallery plays a key role in elucidating this, and in provoking thought on the nature of what a museum is, as well as how this concept has changed so significantly over time.