Basic Income: And How We Can Make It Happen 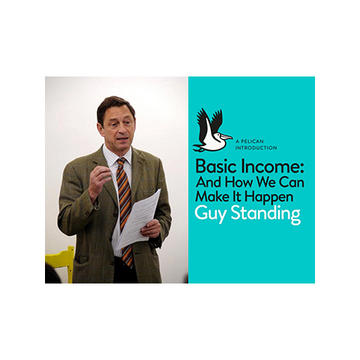 With growing concerns about inequality, geopolitical instability, and robot apocalypse splashed across our newspapers, televisions, and phone screens, basic income has become a hot topic for political commentators in recent years. For some, basic income is an antidote to paternalistic and inefficient welfare systems; for others, it is way to redistribute earth’s common bounty.

For Guy Standing, basic income is nothing less than his life’s calling. It is a cause he has championed from Davos to rural India, and as the topic gains increasing notoriety through media attention, government-organized trials, and NGO initiatives, Guy is ideally placed to reflect on the conceptual and practical reality of a basic income. On 8 May, his wisdom and passion about this topic were on full display in Ertegun House.

Guy arrived in Oxford a day after presenting his report, “Piloting Basic Income as Common Dividends,” to a packed auditorium at the Royal Society for the Arts in London. At the RSA, Shadow Chancellor John McDonnell, former Labour Leader Ed Miliband, as well other leading members of the Labour party were on hand to hear Guy’s plan for developing a BI trial in the UK. At Ertegun House, Guy expanded on what he calls the “Eight Modern Giants” – eight obstacles which obstruct global progress and human flourishing at the beginning of the twenty-first century. The giants encompass a range of modern ills which plague societies across the developed and developing world: inequality, insecurity, debt, stress, precarity, advancing robots, extinction, and populism and neo-fascism. For Guy and other BI advocates, the benefits of a basic income extend beyond easily measurable metrics like poverty rates to include improvements in less quantifiable, but equally important, markers of well-being, such as emotional health and stress levels.

As someone working on the contemporary effects of technological change on labour policy and income distribution, Guy’s talk came at a particularly important moment for me. Of late, many commentators have bemoaned a lack of imaginative thinking in contemporary political philosophy. But to hear Guy speak in the Ertegun House and to witness the influence of his work on basic income trials across the world suggests a different picture. Problems in the twenty-first century, whether climate change, wealth inequality, or unequal technological advancement, are increasingly global in nature and the solutions of earlier centuries can appear parochial in the context of these new, globalized perils. Just as earlier centuries have addressed novel problems that accompany unequal human progress, the twenty-first century will require new solutions to emerging and recurrent problems. For me, Guy’s work on basic income represents the kind of forward-looking solution building that is required to slay the formidable giants of today and ward off the unforeseen problems of tomorrow.