A Ballet Dream at the Oxford Playhouse 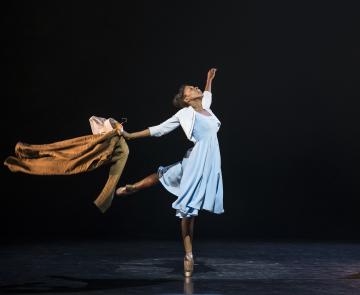 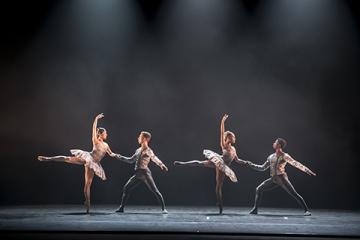 “I have had a most rare vision. I have had a dream, past the wit of man to say what dream it was.”

On a freshly rained-on Wednesday evening, a group of Ertegun scholars made our way to the Oxford Playhouse for what we thought to be a ballet performance which would conclude our Shakespeare circuit. After an intensely funny and heartbreaking Juliet and Romeo (Lost Dog Theatre Company) at the North Wall Arts Centre and the disappointing Romeo and Juliet (Royal Shakespeare Company) at the Barbican, London, what better way to conclude the circuit than ballet. It would be light, predictable and easy on the senses. Or so we thought.

At the first sight of the minimalistic stage set-up with ballet dancers dressed in neutral tones, it was clear that the Ballet Black company consisting eight dancers of black and Asian descent, would take every shred of expectation we had of ballet and even Shakespeare, and during the course of the evening spin it into the most beautiful and unexpected dance dream.

As the lights dimmed and the music crescendo-ed to beckon at our curiosity, we caught the first sliver of sunlight at dawn bathing the dancers into wakefulness. This dance story inspired by Can Themba’s 1963 short story The Suit, revolves around la vie quotidienne of a married couple which at first appears seemingly normal, that is until the husband (Jose Alvares) walks in on his wife (Cira Robinson) cheating on him. The wife’s lover immediately flees the scene leaving behind his suit in his haste. The husband punishes his wife by insisting the suit accompany them in their day-to-day life - at the dinner table, for a walk in the park, for an evening out with friends. The wife is embarrassed at people seeing the suit and tries to hide it but her husband won’t have it. He forces the suit into every minute of their lives, driving her into deeper shame and guilt, until at the very end, he finds his wife at home, dead. She had hanged herself with the tie from the suit. He weeps inconsolably. In this dance which won the company a 2018 Knight of Illumination Award for Dance, Alvares and Robinson do a fantastic job of communicating their pain to the audience, each coming from different sides of the situation (the betrayer and the betrayed), through impeccable choreography and expressions. The other dancers successfully enhanced the mood conveyed by each main dancer by mimicking his or her movements and expression to match theirs. They conjure the suit to life and segued effortlessly between playing inanimate objects (mirrors and buckets) and filling in as extras (passers-by, friends, dancers) using mesmerising, almost contemporary-dance-like movements.

After a quick intermission for drinks where most of us remained planted in our seats, excitedly discussing what we had just witnessed and wondering when the “Shakespeare bit” would appear, we were ready for the second half.

A Dream Within a Midsummer Night’s Dream started out on an unexpected note – heavy classical music, ballerinas in taut arabesques supported at their waists by male dancers, accompanied by a respectful silence from the audience until the music made a very sudden turn. Skyrocketing to playfully high piano notes, freezing the dancers in place, and beaming a spotlight on – a very green, very mischievous Puck, we knew the real show had begun! With a confetti-sprinkled entrance, the sprite led the dancers into a series of dream sequences in Shakespeare’s A Midsummer Night’s Dream. Dressed in brighter hued costumes this time and lighter fabric, the dancers weaved these dreams out for the audience through dance, taking turns to play butterflies, Lysander, Demetrius, Hermia, Helena and Bottom, holding our eyes captive to every movement as if by magic. A Dream Within a Midsummer Night’s Dream was described as a ‘sexy, cheeky frolic’ by londondance.com and was shortlisted in 2014 for an Olivier Award for Outstanding Achievement in Dance and nominated in 2018 for the UK Theatre Awards for Achievement in Dance. By the end of the show, the audience were on their feet, applauding.

The excursion was a real treat for us and a wonderful way to conclude our Shakespeare run for the Michaelmas Term. The Ballet Black’s award-winning rendition of A Midsummer Night’s dream and the bonus The Suit, which we were not expecting, were both so marvelously crafted and so deftly executed. Us Ertegun scholars left the Oxford Playhouse feeling like we had just experienced a rare vision, or a dream. One we were quite reluctant to wake from.