A guided tour of Oxford

We had the opportunity to tour the city of Oxford on 7th October with Magnus Macfarlane, one of the Oxford Blue Badge guides. This tour was special because it was the very first Ertegun event for the new scholars (cohort of 2017-18) and was an opportunity for us to get introduced to one another.

Magnus greeted the group in each one’s native language and in a melodramatic style, discussed reasons for Oxford to be chosen as the seat of learning instead of a big city like London. Not surprisingly, one of the reasons was so that students do not get distracted by the pandemonium of a large city. He discussed the Oxford-Cambridge rivalry and emphasised that it had surpassed ‘the other place’ (the term used to refer to Cambridge University) in some of the surveys that declared the University of Oxford as the best in the world!

Magnus commenced the tour by sharing trivia about Eagle and Child, also called Bird and Baby and its literary connections with J. R. R. Tolkien, the famous creator of The Lord of the Rings and C. S. Lewis known for his children’s series - The Chronicles of Narnia.

We continued walking towards the centre of the city, where we deliberated on Oxford University’s journey as the oldest university in the English speaking world which has evolved from being an all-male university to becoming one of the world’s most diverse co-education universities. While discussing Oxford’s history, there was a debate on the college that could classify as the oldest college and University, Balliol and Merton Colleges, which were established between 1249 and 1264 were close contenders. In the 13th century, rioting among the local city dwellers and students necessitated the establishment of accommodation for students and this, along with dining hall, chapel and library, were required for an institution to be recognised as a college. Since there is little evidence on which one met all the requirements first, this question would remain unanswered and continue to be debated.

Our next stop was outside the Sheldonian Theatre which is the official ceremonial hall of the university. This has been built 1660s, named after Gilbert Sheldon – the then chancellor of the University and has been designed by Christopher Wren. Edmund pointed our attention to the thirteen square pillars topped by head and shoulder sculptures of Roman emperors. The original set of sculptures have been changed; the present heads are the third set.

Situated opposite the Sheldonian, is the Museum of History of Science, also known as the Old Ashmolean Building and is recognised as the world’s oldest public museum. The museum holds a vast collection from the Middle Ages to the 19th century and one of the famous object that is part of its collection is Einstein’s Blackboard, that was used by Albert Einstein during his visit at the University of Oxford.

We then progressed to the University Church of St Mary the Virgin, which was adopted as the first university building in Oxford and is the centre from which the University of Oxford grew (literally and figuratively). This building was also the seat of the university government and used for awarding degrees. We were lucky to be welcomed by the symphonic classical organ while we walked through the glorious church and admired the 19th century stained glass window. The tower of this church provides an exceptional view of the city, especially Radcliffe Square, the Radcliffe Camera, Brasenose College and All Souls College. 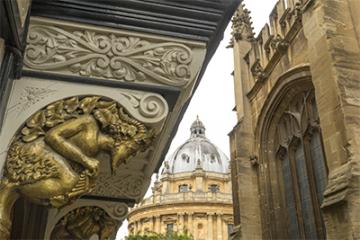 We then gathered around the little passage that housed one of the rooms used by C.S Lewis during his time at Oxford. This is where Magnus brought our attention to the centrepiece of the door that features a maned, lion-like face carved into the wood, and is surrounded by two satyrs and a solitary lamppost. He narrated the famous legend about Lewis walking out of the side door of the University church, where he had been preaching, seeing the snow-covered door, satyrs and lamppost and being inspired for the creation of Narnia.

Outside St Mary’s church we observed the spire which is claimed by some church historians to be one of the most beautiful in England. Apparently, the reason behind having so many spires at Oxford University was to inspire the students to look up and praise Thy Lord, but there is a parody that calls Oxford the city of ‘perspiring dreams’ instead of city of ‘dreaming spires’.

We then stopped at the famous the Bridge of Sighs which is a skyway joining two parts of Hertford College over New College Lane. This bridge looks like the famous Bridge of Sighs in Venice and the story goes that this bridge was built to ensure that the students could use the library after 9pm without stepping out of the college boundaries. Thankfully most colleges do not follow such time limits anymore!

We then followed the road under the bridge of Sighs and reached our last destination for the evening, The New College. This is one of the largest colleges and is known for its design and architecture. It is one of the first colleges to have its motto written in English instead of Latin - "Manners Makyth Man.” The college is also famous for the ‘Harry Potter tree’ which was used in the film for the scene where Moody turns Malfoy into a ferret.

We ended the tour by visiting the college chapel which features 14th century stained glass and walked around the expansive garden that contains an Elizabethan viewing mound and the ancient Oxford City Wall which is maintained by the college and inspected by the Corporation of the city every three years.

The city tour presented an opportunity for the scholars to get to know Oxford and get introduced to one another! Before we departed, in Ertegun style, Edmund treated us for tea and cake at new Bodleian Café in the Weston Library.